In order to better understand Renko charts, I want to explain making Renko bricks and how each new brick is made.

This fixed Renko brick price symmetry gives the charts their clean look and helps to remove the noise from the chart – but how is each new renko brick made?

You are looking at NinjaTrader Renko charts.  These are gold charts, so I know that each brick must have 3 ticks of price for a new Renko brick to be made.

I made a screen prints of the charts, before the last brick was completed – further note that you are looking at Renko bricks that are counter in direction to the previous brick. 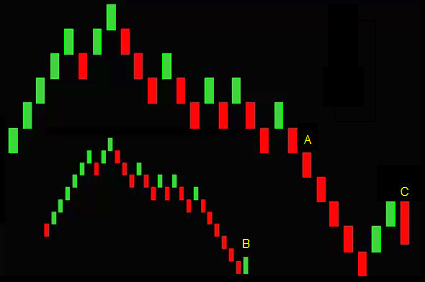 Look at the small chart inset marked B, where the last completed brick is red.  Does it then look like the green brick next to it is bigger, and if so why isn’t there a new green brick?

This actually isn’t the case.  The brick is green because there has been a up tick, so it is higher than the red brick closing low.  You can see this 1 tick of up movement, when you compare the uncompleted green Renko brick to the high [open] of the red brick.

There were 2 more up ticks so the brick completed, which also means it is 3 bricks higher than the high [open] of the red brick.

The last brick [C] on the chart is red – what has to happen to make it complete?  There are already 2 down ticks, so 1 more down tick will give a completed red brick – this is the same way that the first red brick [A] in the down swing to the low, looked like at one point.

Knowing how Renko bars are made is also very useful for executing a trade.  For instance, let’s say that when I look at my trading indicators, I can see that a buy setup will ‘trigger’ if the green bar completes.

Since I know what price that will be, I can put a stop-limit buy there BUT if the brick completes red, simply remove it from my chart.

Does this all make sense?  If not, it really won’t be complicated after you focus on making renko bricks on your chart.

When you watch the video, I will further discuss these charts along with marking them for how the bricks complete real time.

Discussion of Renko price trading strategies and how price affects our trading method. Renko chart prices can be trade setup filters, but they can also be used in trade setups for the failure of support or resistance, along with the breakout of trend lines and price patterns.