Which Renko trading strategies are the best to trade – those for a Renko trading system or trading method?  When trying to make this decision there are trade-offs that must be considered.

But after learning trade setup filtering, your method trading would be more profitable than system trading – now what would your Renko trading strategies decision be then?

Consider the tradeoff between the Renko system being easier to learn, but ultimately the Renko method being more profitable.  This might lead a trader to make a decision to learn the method.

But again, this is not a simple question – for instance:

This could be a good approach IF the system was adapted from the Renko method.  Meaning that learning the system and then the method, did not entail unlearning and relearning – that the Renko trading strategies for the method were an extension of those for the Renko system.

When trying to learn our trading strategies, start with the Renko system first and then progress further into learning and trading the Renko method.  And especially do this while learning:

It is important when trying to learn a skill like trading to have steps and progressions that show accomplishments along the way.  Because if not, it can become very frustrating and lead to many self-doubts.

I think that never trading until all the Renko method strategies were understood is not necessary or the best approach.  This will become more apparent when we discuss the chart below.  It is a chart where the system was profitable [even if the method was more profitable], and the trade setup filters were not difficult to apply.

To begin with, the Renko trading system and method use the same trade setups.  The differences then become the setup components and/or whether the setup can be traded:

So, some of these simply are trade setup components that are not hard to identify.  But those that are trade filters for price and consolidation, will take longer to learn and understand.  However, it is also these filters that can ultimately make the Renko method more profitable than the Renko system.

The following link will discuss the Renko trade setups and filters in greater detail:  Renko Trade Setups And Trade Filters

Differences and tradeoffs between the Renko trading strategies for system and method will be discussed further using the Renko chart below.

I selected this trading period because it shows all of our trade setups.  And then after trading, it became very apparent that this chart was a great example to use for talking about the tradeoffs between the system and method trades that occurred.

Trading the Renko trading method was more profitable than the trading system.  And in this case, the filtering for setup location and the trading prices was actually very easy. 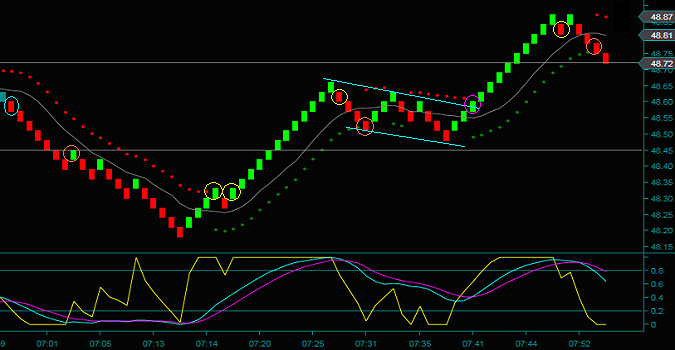 To begin with, note the gray lines – when the trading period began, the top line was price resistance and the bottom line was price support.  Additionally, I want to show the ‘key’ for the colored circles on the chart:

The Renko setups and trades marked on the chart will be discussed at greater length in the trading video.  But I do want to point out the yellow circles that show each of our Renko trading strategies and were setups for both the method and the system:

Discussion of Renko price trading strategies and how price affects our trading method. Renko chart prices can be trade setup filters, but they can also be used in trade setups for the failure of support or resistance, along with the breakout of trend lines and price patterns.

Step by step approach for learning Renko chart trading, beginning with the basics of the Renko method and system. Then start practicing trading the Renko system with the objective of advancing to the trading of the full Renko method.

Gold Renko trading has been added to our Renko trading strategies. The gold Renko charts show the same method clarity as the Oil and Emini NQ charts that are also traded. And there is additional flexibility and potential for overnight trading, which is a benefit for traders from all time frames.